Part 2: Can people “switch” from not valuing photography to valuing it?

I want to start this out by sharing the quote I shared with you at the end of Part 1:

We must change the existing model of what we’re doing…

And make our current challenges OBSOLETE.

That’s what today is about.

Most photographers are chasing after the same avatar.

The challenges with that are many.

There’s more supply than demand in our market, driving average prices down.

That leads to more competition based on pricing, and just less for everyone.

The quest for doing more marketing when we don’t have the time for it..,

…Among the slew of other things we talked about yesterday.

I call this the “Avatar Chaser”

Being an avatar chaser instantly lumps people into vying for the same piece of the pie as everyone else.

Usually it’s the search for that one “magic marketing tactic that will change everything.”

Or sometimes it’s trying to do more of all of the marketing tactics a little better.

These usually lead to “temporary relief,” much like an aspirin to a headache.

But it doesn’t treat the root cause  – the REASON FOR the headache (dehydration, lack of sleep, stress, or something much worse).

In the photography market, the deep root cause is that Avatar Chasers are all selling to those that already VALUE photography and have the money.

Avatar Chasers are competing for that exact same person.

And so Avatar Chasers are competing in what the book Blue Ocean Strategy so well describes as the “bloody red sea of competition”, instead of creating a blue ocean of one.

So how do we create our own Blue Ocean, and instead of Chasing an Avatar, doing something totally different?

Step 1 is we market not to a person, but something completely different…

What if we don’t CHASE an avatar…

But do something completely different…

“…not to create mass desire– but to channel and direct it.”

– Eugene Schwartz, who is often noted as the best marketer in the world

Let me tell you a quick story that I think will clarify what it is I just said and the quote as well:

I couldn’t believe what I was doing…

For YEARS my husband and I had been baffled by what some of our our friends had done…and here we were doing it ourselves!

We talked about it privately.

We talked about it publicly to our friends as well.

Who spends tens of thousands of dollars for something they can only use for 3, AT BEST 4, months of the year in Montana?

….And to be tied to yet ANOTHER 30-year loan on top of our mortgage?

Yet there we were, beaming smiles and all…

AND WE WERE THRILLED!

We were floating on air.

We could not WAIT to get that big-old-beast out in the woods.

And to this day we don’t regret it.

Our financial situation was close to if not exactly the same as just a few months prior, when were still thinking it was completely frivolous to spend that kind of money on a camper.

So what happened here? Did what we value CHANGE? And what’s it got to do with photography?

I remember actually sitting there while signing the paperwork, a bit intrigued as to how and why this was all happening…

Now, it’s important to also note that we came to the conclusion we needed a camper OURSELVES.

We weren’t pushed into it by a door-to-door salesman, or tricked by a phone solicitor telling us our long lost uncle was in prison and bail needed to be paid now over the phone.

Nor did our friends try to CONVINCE us purchasing a big-ol camper would be a good decision.

We would have run fleeing into the night if any of those situations would have happened.

But how did that decision REALLY happen? What’s the process, and can we do the same in our marketing?

It was only a matter of weeks between deciding we wanted to purchase a camper, to buying one…between NOT valuing the purchase, to valuing it.

As Eugene Schwartz might say, the desire was not created, but channeled and directed.

The Old Venn Diagram Vs. The New One

Let me show you a diagram to explain:

First, here’s the diagram from the previous lesson  – where the “Avatar Chaser” Falls: 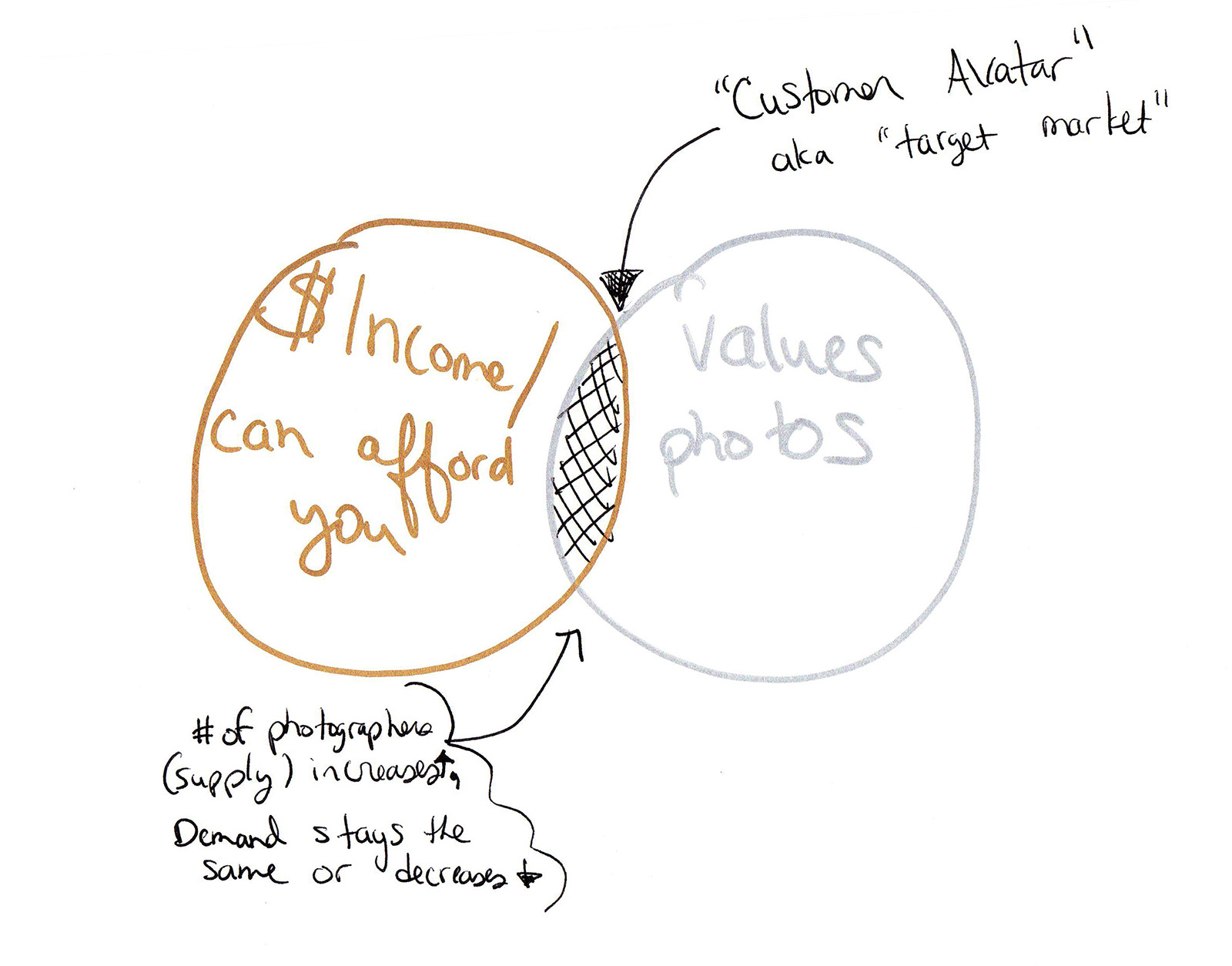 So in general, it’s an “Income Level” and “Values Widget” diagram.

This fits any market, including campers/travel trailers.

As you may know, one of the biggest desires I’ve been able to tap into, relates to tween photography sessions.

Now, this email series is about you finding and tapping into your OWN markets, and desires of your markets.

But the tween example is an interesting one…

Because while at first glance you may think the desire to channel is the desire the tween has to feel more confident and have more self love.

But that’s actually not the case…

…But we’ll go over that in the next part 😉